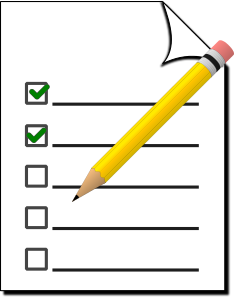 Bill Gates gave a Ted Talk in May 2013 about feedback, and the lack thereof, directed at teachers. Gates cited a study that claims 98% of teachers only get one word of feedback, and that feedback is most often “satisfactory.” While it’s (barely) better than nothing, a single thumbs-up is about as useful for honing one’s craft as a lollipop.

Gates goes on to explain that 11 of the 15 top-ranked countries in reading comprehension have a formal system of teacher feedback– and the U.S. is not one of them.

In the meantime, we have to cobble together some sense of whether we’re doing a good job through test scores, student morale, administrator observations, parental input, and whether we keep getting asked to come back the next year.

There is one contingent of society that’s usually (quite) willing to provide copious feedback–your students. While student feedback must be kept firmly in context, it can be instructive.

One problem with feedback is that it’s typically given at the conclusion of a task or performance. There’s a surprising amount to be gleaned from preemptive feedback. While initial impressions, aspirations, and conjecture aren’t the most solid of foundations, they are psychological factors that impact performance. Giving your students the chance to provide feedback (or “intel”) at the outset of the school year allows you to judge the trajectory of your students’ experience when there’s still time to make adjustments.

In the same spirit as the premortem, traditionally after-the-fact phenomena–marshaled into service early in the year–can have a dramatic impact on goal-setting, expectations, mindset, and performance.

So how does one feed forward? By asking the right questions, early and often. Let’s use a basketball feedback scenario as an example.

Imagine I’m a poor defender. My coach watches my opponent, an adept ball handler, juke by me time after time. After some observation, my coach tells me, “You’re watching the ball. You should watch your opponent’s hips instead. Then he won’t surprise you, and the ball will follow his body.” I do this, and my defense improves. The only “cost” here is that the points scored against me cannot be unscored. (And I may feel silly in front of my teammates.)

If I am a mediocre athlete, but know how to acquire some preemptive feedback, I may ask my coach something like, “Coach, I’m not a very good defender. Do you have any tips for preventing nimble gentlemen from getting past me so readily?” Provided my coach knows a thing or two about b-ball, he can give me the same tip about watching the hips without ever seeing me play. This saves our team a loss at the buzzer, and me some humiliation.

Many teachers distribute a survey at the end of the year, but I suggest doing one toward the beginning. Many teachers also pre-test their students to establish a baseline of academic understanding. Applying this sound logic to a broad range of topics can earn us some much-needed credit and wisdom early in the year. Depending on your comfort level, you may want to ask some bold questions.

Questions like these may not be appropriate for everyone, but you may be glad you asked them later on:

“Is there anyone with whom you absolutely do not want to work?”

“What’s your biggest fear related to this class?”

“What have you heard about me as a teacher, good or bad?”

What are you hoping to learn from this class specifically?”

You may even want to have a two-part survey, in which the top is personalized, and the bottom anonymous. Anonymous feedback may seem of dubious value, but it can be some of the most potent. There will, of course, be comments that are unhelpful or worse. But knowing that you or your class has a reputation (especially unfounded) may be invaluable early in the year. Are you known as a harsh grader? Is the word on the street that you’re a pushover? Having your ear to the pulse of the student body allows you to leverage information in whatever way may prove helpful. It also lets you address student concerns directly, creating a relaxed, focused environment conducive to learning.

If you’re a new or recently-arrived teacher, knowing about pre-existing tensions between students doesn’t come with your employee handbook. Being tuned into these social problem areas may help you cut off an Incident at the pass. (I can speak to this particular point, as I unwittingly paired up two bitter-but-quiet arch enemies in the 7th grade during the first week of school. Moments later, there was bloodshed and a full-on Incident. It would have been nice to know about their history beforehand.)

Perhaps there is a project or a unit for which your class is infamous. If a student is feeling some trepidation about this, some preemptive feedback gives you a great platform to discuss how to properly prepare. Addressing this early with concerned students demonstrates your genuine concern for their success and helps them pace their learning. Such an approach can replace useless anxiety with pacing and preparation.

It’s likely there are troves of useful information in the heads of your students that will never see the light of day. They’ll be glad to share it with you, free of charge. All you have to do is find the right way to ask.

Join a Community of Educators, Homeschoolers and Parents